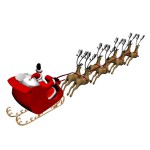 In the home of every boy or girl who has been good there will be a lot of excitement tonight as Santa’s visit is eagerly anticipated.

For the last 60 years NORAD, the United States of America’s Air Defence System, has helped children around the world track Santa’s movements using its advanced detection systems. You can follow the live data from their system on their dedicated Santa Tracking website by clicking here.

On Boxing Day a host of locations across South Devon will be the real star of the BBC’s new Agatha Christie Block Buster, “And Then Were None”.

The story of Murder set on Soldier (Burgh) Island is being shown in a  three part series on BBC One starting at 9pm on the 26th December.

And Then Were None is the best selling crime novel of all time, with 100 million copies sold worldwide and was recently voted by Agatha Christie Fans as her most popular novel.

Like most residents, many who work in our public services will be taking time off to be with their families over Christmas.

Listed below is some of the key information about what changes to services are being made, although it is worth remembering our Fire Service, Police, Health Care Workers, Lifeboat Crews, Armed Forces and many others who provide essential services will be working as normal.

Bin collections will be made on the normal day in the week commencing Monday 28th December 2015, except if your bin is due to be collected on Friday 1st January 2016.

The service will be unavailable on 25 and 28 December, and 1 January. People phoning outside of these office hours will hear an answer phone message giving details of how to get assistance if they are homeless that night.

The Emergency duty service will be available from 16.30 to 09.00 throughout the holiday period for anyone who is actually homeless at this time.  The service can be contacted on 03004564876. This service should not be used for non-emergency enquiries.

All Torbay Libraries will be closed from Friday 25 December to Monday 28 December inclusive, and Friday 1 January.

Our Emergency Services will be busy over the festive period and it is always worth thinking about the best option if feeling unwell or in pain.

There is a wealth of information on the NHS Choices website and some really useful advice about how to deal with many common problems. You can find it by clicking here.

Details of Pharmacy Services available across Torbay on Christmas Day, Boxing Day and New Year’s Day can be found by clicking here.

If you are using the bus on New Year’s Eve bear in mind that services will be finishing a lot earlier than normal (Around 8:30pm).

There will be no Bus Services on Christmas Day or New Year’s Day.

On Boxing Day only the “Hop 12” service between Brixham, Paignton, Torquay and Newton Abbot will be running and with a special timetable.

You can find full details of bus services over the festive period by clicking here and do take time to check them if going out for the evening, particularly if relying on what would normally be “the last bus” to get home.

It has been reported that after the failure of the proposed TRTBID, the ERTC was reviewing its operations.

As part of this it was announced that the English Riviera Visitor Information Centre on Torquay Harbourside would close its counter service from January 1st as part of the savings now necessary.

In a further update received this week from the ERTC, it has been indicated that this service will continue to operate, but on reduced opening hours over the winter period when usage can be exceptionally quiet.  From Easter the English Riviera Visitor Information Centre will be open 6 days per week.

If your business would like to volunteer to help working in the VIC, maybe one day a week, through the busiest periods then the ERTC team would love to hear from you. Just email angela.wright@englishriviera.co.uk

In the early hours of Sunday morning a milestone was reached as after 7 years working on the Harbourside, Street Pastors handed out their 10,000th pair of flip flops.

To mark the occasion Kate Walker from Paignton was handed a special pair of Golden Flip Flops as the high heels she was wearing on a night out became a bit too uncomfortable. You can see a picture of her receiving the Golden flip flops on the BBC website by clicking here.

The Street Pastors, who are all volunteers, do a great job helping keep those enjoying a night out safe. They will be out over the Festive Period as well, giving out more flip flops to those who might otherwise be tempted to walk home bare footed, with predictable results.